This is a series on Sapta Swaras, the seven musical notes of Carnatic music. We discussed about swaram Ri in the previous post. Now let’s explore the next swaram Ga.

Gandharam is the third swaram of Sapta Swaras. It’s shortened as Ga while uttering the note in a Swara Kalpana, or while talking about the swaram informally. It can also be shortened further as simply g in music notations.

In the last post we learned about the three swarasthanams of Ri. Similarly, Ga also has three distinct swarasthanams. They are:

These are three consecutive pitches. The first, Suddha Gandharam, or Ga1 for short, is the lowest pitch among the three. You won’t hear Suddha Gandharam very often in concerts. The reason for this will be clear once we learn about the concept of Vivadi swarams. That said, Ganamurthy is a popular ragam which has Ga1.

A special aspect of Sadharana Gandharam is, it is seldom played or sung as a plain, steady pitch. It’s almost always rendered with Gamakams. Gamakams are various glides, oscillations and other ornamental techniques used to beautify music. Sadharana Gandharam yields itself to be beautified in so many ways. 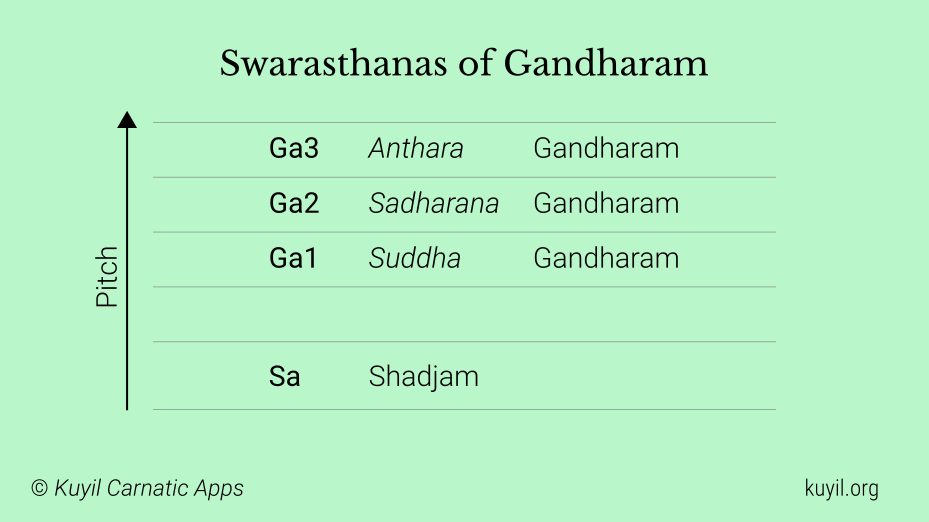 Now that we know about the three swarastahanms of Gandharam, we can do some practice to master these swarasthanams. First, we should remember that the swarastahanams are based on Sa. If we take Ga1, it is at a certain distance from Sa. Ga2 is at a distance slighly longer than Ga1’s distance from Sa. Among the Gas, Anthara Gandharam is the farthest away from Sa. We should practice these swarasthanams with the help of Sa.

Alighing ourselves to Sa, (I promise I’ll go into detail about Sa in a later post), we should learn to sing Ga1, Ga2, and Ga3. We should be able to sing these swarasthanams at will, in any order.

Similarly, we should also be able to listen to a sound and tell whether it is Ga1 or Ga2 or Ga3 for not a Ga at all.

Sadharana Gandharam is so often bent, oscillated, twisted and decorated that, most students don’t know how to sing (or play it accurately) without any Gamakam. This should be considered as a defect. Plain pitch positions of swarasthanams are foundational. They are the basis upon which gamakams are formed. So, every student should master these pitch positions.

Shruti Carnatic Tuner (Android app) detects the swarams you sing or play on instrument. It even shows your accuracy. It can also play reference sounds of swarasthanams to help you to align yourself to the swarasthanams better.

The following are the activities you can do with Shruti Carnatic Tuner to master Ga:

You may have noticed that it’s difficult to switch between swarasthanams. Also, to beginners, all swarams sound the same; it requires some practice to know the difference between them.

Sadhakam (Android app) helps you to improve your swara gnanam, so you just know the swaram and swarasthanam when you hear a sound. Do the second activity on Level 1 on Sadhakam, which works out the three swarasthanams of Ga. 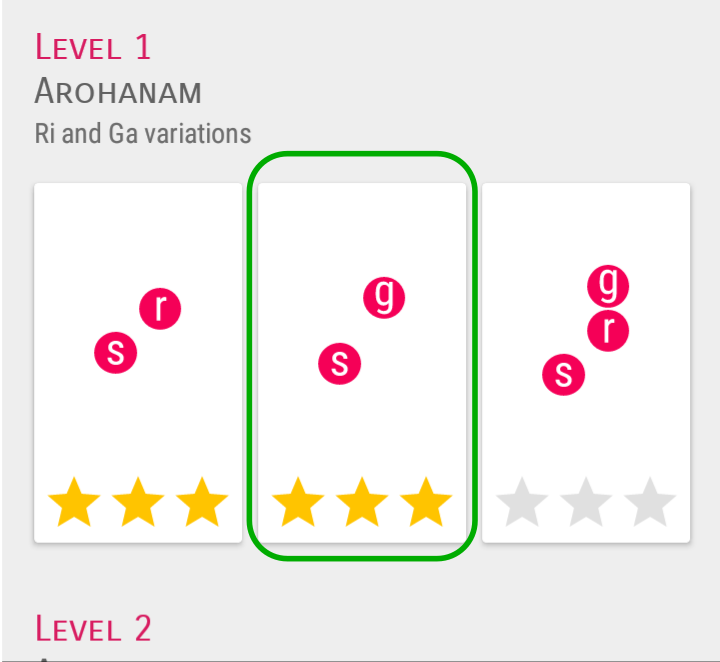