In Carnatic music there are seven musical notes, the Sapta Swaras. They are Sa, Ri, Ga, Ma, Pa, Dha and Ni. In this series we’ll take a look at each of these swarams, the pitch positions they take (swara sthanams), and the relationships between them.

The first swaram, Sa, is of great importance. It will be dealt in detail in another post. This post is about Ri. For now, it’s suffice to know that all swarams fall in place based on the position of Sa. Let’s move on.

Rishabam is the second swaram in our Sapta Swaras. It is abbreviated to Ri, or simply r in music notations. Note that Ri is right next to Sa in the sapta swaras sequence. So it has a pitch higher than Sa but pretty close to it. But what is the exact pitch of Ri? For that, we have to understand swara sthanams.

The first pitch position or swara sthanam of Ri is just a little higher in pitch than Sa. When you sing Ri at this pitch, it is called Suddha Rishabam, or shortly, Ri1. Suddha Rishabam occurs in ragas like Mayamalava gowla and Saveri.

The second swarasthanam of Ri is one step higher than Suddha Rishabam. It’s called Chatushruti Rishabam, shortly Ri2. It occurs in ragas like Mohanam, Sankarabaranam, and Kalyani.

Shatshruti Rishabam (Ri3) is one more step higher. Nata is a popular ragam which has this swarasthanam. 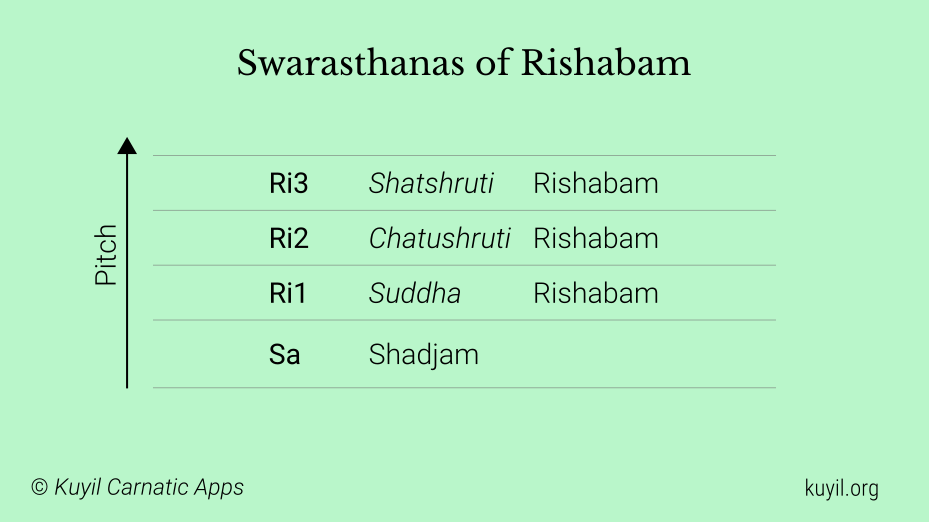 Understanding the theoretical aspects is one thing, mastering the practical aspects is another. If you are a music student, you should learn to sing or play these swarasthanams accurately. You also need to learn to identify the swarams you hear.

Traditionally, as a music student you learn swarasthanams through varisai exercises (sarali, janta, etc). For instance, when you sing sarali in Mayamalava gowla, you are learning to sing Ri1. When you learn Vara veena geetham in Mohanam, you’re learning to sing Ri2. However, changing from Ri1 to Ri2 is not sufficiently practiced. That’s why you may have difficulty switching between ragams.

In short, you need specific and focussed practice activities in order to master swara sthanams.

Shruti Carnatic Tuner (Android app) detects the swarams you sing or play on instrument. It even shows your accuracy. It can also play reference sounds of swarasthanams to help you to align yourself to the swarasthanams better.

The following are the activities you can do with Shruti Carnatic Tuner to master Ri:

You may have noticed that it’s difficult to switch between swarasthanams. Also, to beginners, all swarams sound the same; it requires some practice to know the difference between them.

Sadhakam (Android app) helps you to improve your swara gnanam, so you just know the swaram and swarasthanam when you hear a sound. Do the first activity in Level 1 on Sadhakam, which works out the three swarasthanams of Ri. 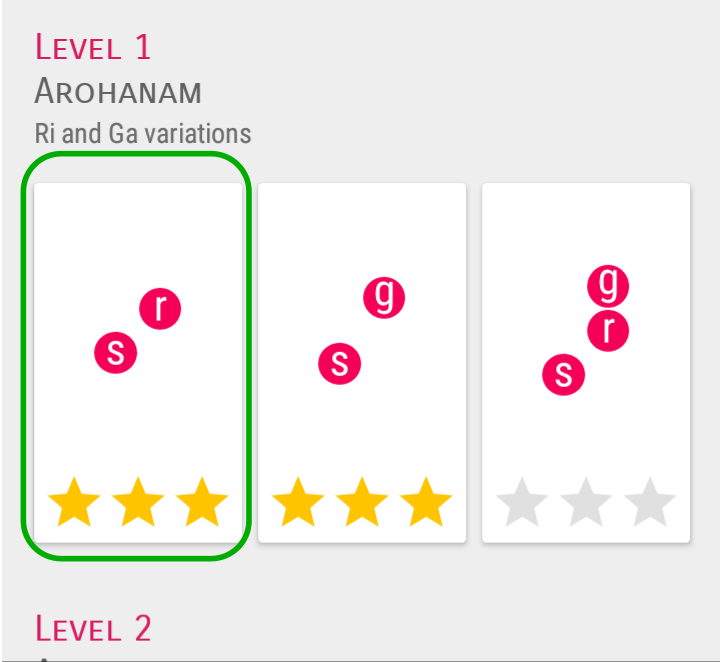