Carnatic music has 16 swarasthanas packed in 12 distinct positions. The 12 tones are more or less universal; many systems of music around the world have them, may be with some differences in the ratios/frequencies of individual notes. (Checkout Shruti Carnatic Tuner for precise swarasthanas used in Carnatic music) 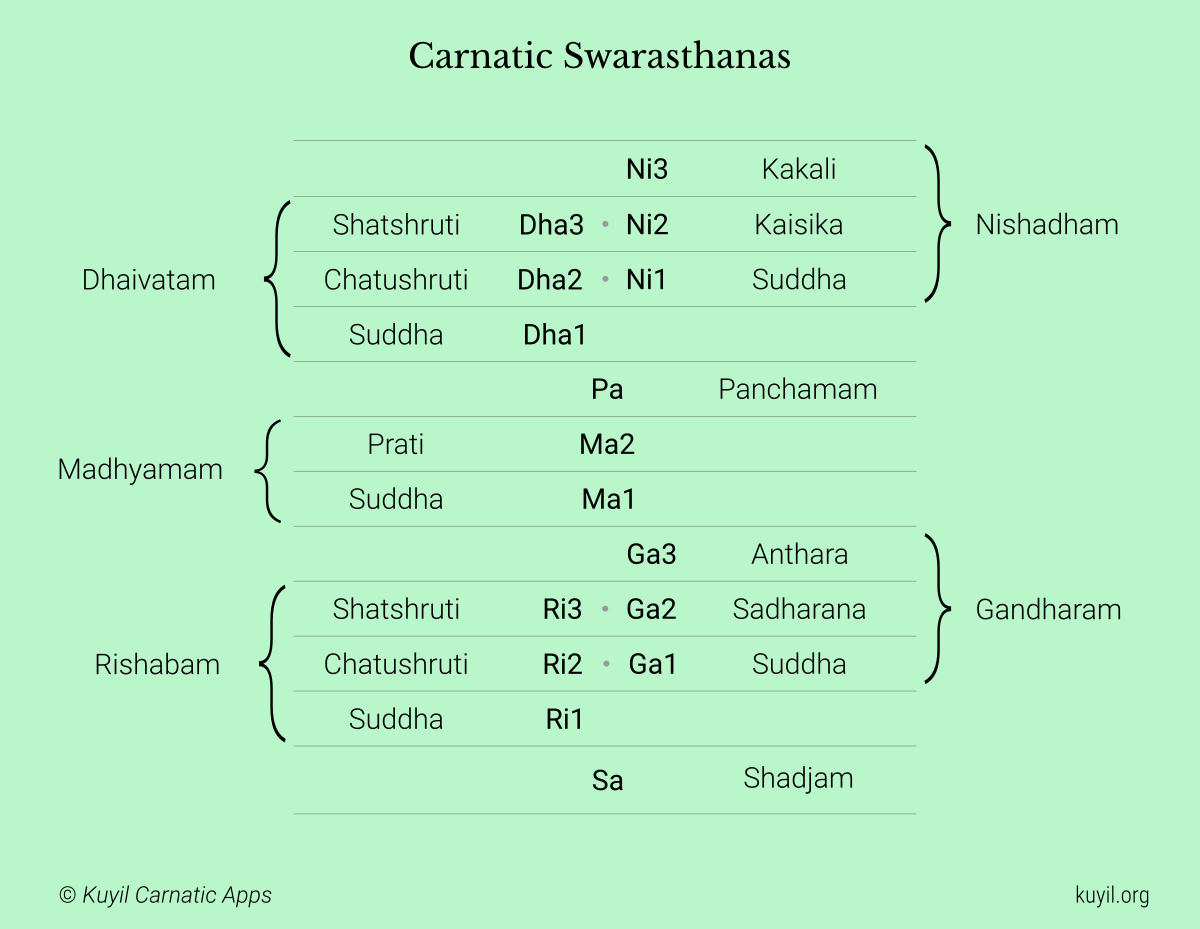 In addition to the usual 12 notes, Carnatic music has 4 more swarasthanas, however they simply share their positions with existing notes. Sounds tricky? Not really, read on.

You can choose any frequency to be your Sa, the Shadjam, and all other swarams take their places based on your Sa. In practice you’ll most likely choose one of the standard frequencies, defined by kattai/shruti/mane number, depending on whether you sing or play an instrument. For example, many male vocalists usually sing at 1 or 1½ kattai shruti, female vocalists 5½, instruments like veena, violin at around 3 kattai. When multiple musicians come together, a common shruti is chosen and instruments and voices adjusted to that. Again, experiment with Shruti Carnatic Tuner to get a practical understanding of how different katti shrutis work and what’s suitable for you.

Your choice of kattai decides where your Sa is. Once Sa is decided, Pa also falls in place. So, swarams Sa and Pa each take one specific position (Swarasthana) and just stay there. The remaining swarams take multiple positions. There are two distinct varieties of Ma, so this swaram takes 2 swarasthanams.

The fact that there are three varients each of Ri, Ga, Dha and Ni, and how exactly they overlap are key aspects of Carnatic music. The entire 72 Melakartha Raga scheme is based on this. However, some books ‘simplify’ swarasthanams by omitting some overlapping swarasthanams and calling the remaining as “1 & 2” or “small & big”. This is a terrible mistake and causes confusion especially in music notations.

The table here lists out all 16 swarasthanams. Correctly numbered short forms are provided. You can also see how they are related. For example, Ri2 and Ga1 are listed in the same line. It means they have same pitch. What is the implication? That pitch will be treated as Ri in some ragas, and as Ga in some other ragas.

Of course, the same logic applies to Dha and Ni.

If you are interested in Carnatic Swarasthanas, try Sadhakam: Carnatic Swara Gnanam Practice (android app). It trains you to recognize swarasthanas you hear. It works with all 16 swarasthanas as listed in the table, with correct numbers and short forms. Sadhakam only plays swarasthana combinations that are meaningful in Carnatic music and avoids all invalid combinations. See this post to know how Sadhakam app can help you to improve your swara gnanam.